Think about Harley-Davidson motorcycles and your mind creates a slideshow of large-sized, heavyweight, iron horses that create micro earthquakes with their signature rumble.

But, did you know that Harley-Davidson actually produced small capacity bikes in their 100+ year old history? Yes, they did. Some worked, some were goofy, but all are gone.

However, there are rumors that the Motor Company will start producing smaller bikes again. The motorcycle buyer demographic has shifted over the years to smaller, cheaper and easier to ride bikes, so the mutterings may turn out to be true.

Let’s take a look at a few of them.

Not everyone could afford and handle a Panhead, so the Motor Company decided to make a more accessible bike. The S-125 was a direct copy of the 1938 DKW RT125 two-stroke. Well, Harley didn’t “copy” the DKW illegally, instead the design was given to the USA a part of Germany’s war reparations.

As such, the same bike is seen as the BSA Bantam in Great Britain, Minsk in the USSR, Yamaha YA-1 in Japan. But it was also produced almost everywhere including Poland and Italy.

The Topper was a rebadged DKW. It was powered by a 165cc, air-cooled two-stroke which needs to be started by pulling a cord, like you would a lawnmower. Sold until 1965, the first generation used the “Scootaway Drive” CVT. However, the belt fell prey to road grime and other contaminants, causing it to slip constantly. So, the updated 1961 model came with a sealed final drive.

Harley bought an Italian company called Aeronautica Macchi, better known as Aermacchi. The result was a slew of lightweights. The bike was fun, according to classic motorcycle aficionados, but Harley fans didn’t like it.

The Bobcat is the successor to the S-125. It had a novel feature of one-piece molded seat, tank and rear fender. Harley didn’t make many Bobcats but its styling influenced the “boattail” Low Rider, XLCR Sportster, Triumph X75 Hurricane and Spanish Bultacos and Ossas.

Yes, it isn’t a motorcycle per se, but Harley is a motorcycle manufacturer. The American Machine and Foundry Corportation (AMF) owned both Harley and hence Aermacchi at the time. Besides the boom for mini bikes, the 70’s was also a boom time for snowmobiles. It started out with a 398cc two-stroke, before going up to 433cc. Nearly 10,000 were made by the time it went out of production in 1975.

That isn’t a typo, you read it right – Shortster. It was the Motor Company’s entry into the minibike craze during the time (read: Honda Monkey), besides introducing the brand to kids. Harley’s plan didn’t work, of course. Folks flocked the cheaper and more reliable Monkey.

Four-time Grand Prix World Champion Walter Villa worked with Aermacchi to develop this 250cc two-cylinder two-stroke. He beat out Yamaha in the Italian GP at Monza in 1974 and 1975. 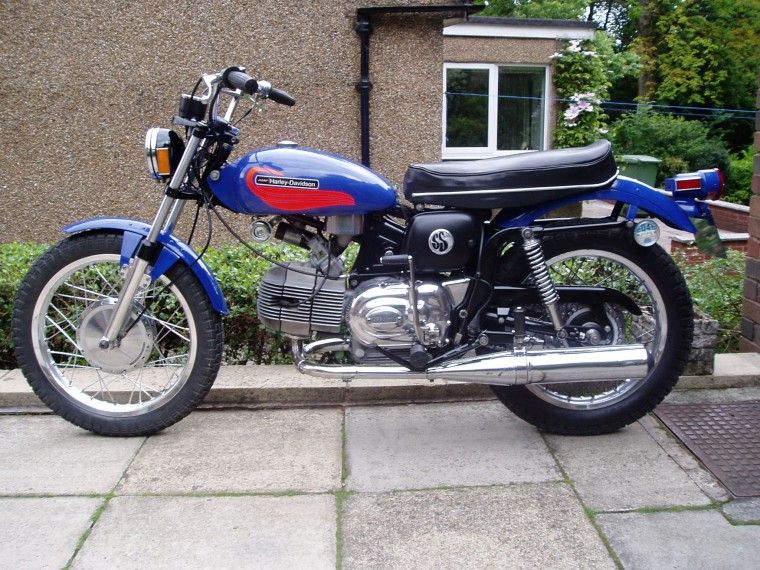 The SS350 was a two-stroke single, the last from the Harley-Aermacchi venture. Harley’s involvement in the lightweight market was also coming to an end, having being beaten by the Japanese manufacturers.